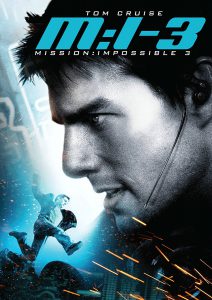 The third installment into the Mission: Impossible movie franchise is this 2006 action packed, interesting, and most importantly, entertaining movie. J.J. Abrams directed this one and it’s not hard to tell, there are a ton of lens flares that can be distracting but don’t take too much away from the movie. This is the first Mission: Impossible movie that delves into Ethan Hunt’s (Tom Cruise) personal life, and it does it in a way that it doesn’t feel forced or  like it only did that to be different from the others. The villain, Davian (Philip Seymour Hoffman) is actually one that intimidates the audience and his way of getting information from Ethan about his personal life is done cleverly. It really feels like there is a relationship between Ethan and his wife Julia (Michelle Monaghan) and you don’t want anything bad to happen to that relationship, you are genuinely concerned for it. As with the first film, there is an unpredictability of what’s going to happen and what the end result of the movie will be.

As with the first two films, there is a lot of unbelievable luck, but of course, that is to be expected with these type of movies. This feature was a lot darker than the other ones, both cinematographic-wise and plot-wise, but it didn’t take away the feeling of these feelings as being just a fun movie. Ving Rhames returns as Luther, but, other than him and Ethan, there aren’t many returning characters, which isn’t a bad thing at all. Many of the new characters are performed well and provide something meaningful to the plot. This film is good.