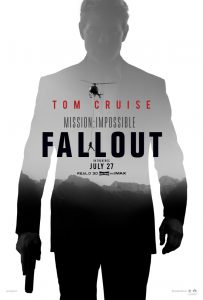 Mission Impossible – Fallout is the sixth film in the Mission: Impossible franchise and my personal favorite. It’s a great blend of action and story, though the villain is kinda recycled, it doesn’t seem lazy, and a new villain is also introduced though, the twist wasn’t very surprising and pretty expected. This film feels very fresh and new, the action scenes weren’t boring at all and were easy to follow, not too much shaky cam or anything like that. Tom cruise, of course, returns to the franchise as Ethan Hunt and though he is getting old, he doesn’t disappoint with action. Henry Cavill plays the part of August Walker, and he has a great American accent as well as a great mustache. Ving Rhames and Simon Pegg return again but don’t make much of an impact on the film as many people would’ve hoped, though they are pretty much just there for humor. The humor in the film isn’t as present as other Mission: Impossible films but when there is humor, it fits very well and doesn’t feel awkward. 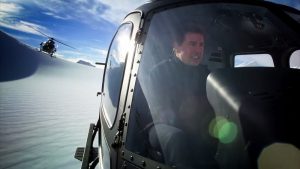 My biggest critic of the film was that the CGI was pretty obvious at some parts, but that was only for small action parts, whenever a wide angle is shown, or a close up, perspective, whatever, it looks good. The shots of the inside of a tumbling helicopter were great, pretty much everything about the helicopter scene was great. Just like the fifth film in the franchise, this movie is surprising, and in an understandable way, like Ethan Hunt is one of the top MIF agents in the world, it makes sense that he would do something no one would have thought of but himself. This film is fantastic.

One Reply to “Mission: Impossible – Fallout”